The CDC Data Trove: Associations between Inactivity, Obesity, and the Diagnosis for Type 2 Diabetes, Posted by J. Dixon, March 18, 2014

During her lecture, Dr. Yanhong Jin presented data from the Centers for Disease Control (CDC) concerning inactivity throughout the United States. The CDC data are remarkable, and one can easily go to the CDC website in order to view PowerPoints that show the year by year increases in inactivity, as well as the increases in the obesity rates and the increases in the number of diagnosed cases of Type 2 Diabetes.

I was amazed how the maps for different parameters had similar distributions showing the areas of high incidence of disease throughout the US.

On the next slide I placed the distribution maps for inactivity, obesity, and diabetes on the same slide. The similar distributions are eye opening! 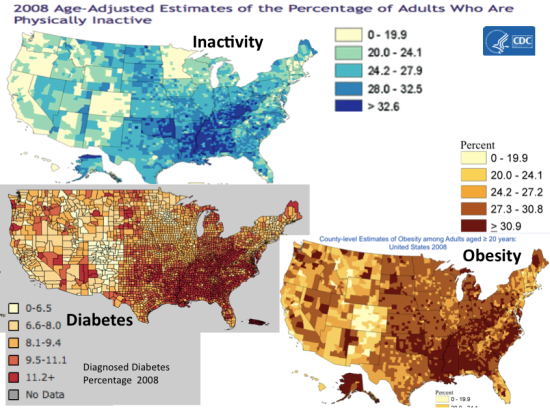 In the following slide, certain regions are demarcated: 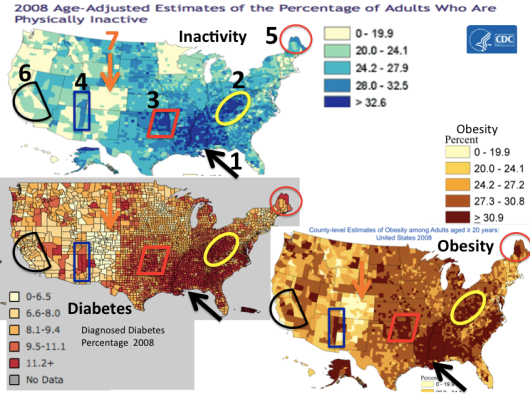 The seven areas indicated on the map are summarized here:

1.The states of Louisiana, Mississippi, Alabama, Tennessee, Kentucky, and West Virginia have high rates of inactivity, obesity, and Type 2 diabetes.

2.Eastern Kentucky and most of West Virginia have extremely high rates of inactivity and obesity (See map close ups bellow).

3.Eastern Oklahoma has a dense area of inactivity, obesity, and diabetes.

4.There is narrow strip in western Arizona and southern Utah that represents the location of various Native American tribes that have high rates of inactivity, obesity, and diabetes.

5.Northern Maine has a region of overlapping high rates of inactivity, obesity, and diabetes.

6.There is a elongated region of central California that represents the central valley that has overlapping high rates of inactivity, obesity, and diabetes.  There is much less inactivity along the coast.

7.  The one bright spot in the country is Colorado, where there are light areas for all the parameters, thus relatively lower rates of of inactivity, obesity, and diabetes, compared to all other regions of the US. 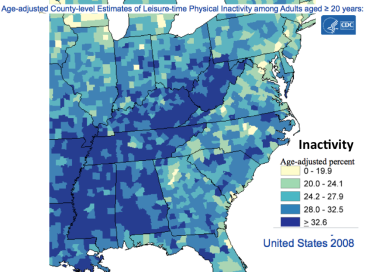 The maps (from 2008) depict extremely strong data that point convincingly to the role of inactivity in the obesity epidemic.  Why are these areas especially prone to inactivity and obesity?  The answers are complex and differ from state to state and area to area.  Obesity is also the result of other factors such as healthy food deserts and an obesogenic built environment.  Some of the possible non-nutrition reasons for the high rates of low inactivity are listed below:

1.High inactivity in areas of the deep South may be due to high summer temperatures and humidity, forcing people to stay indoors in air conditioning.

2.High summer temperatures and humidity may be the reason for high inactivity in Eastern Oklahoma and Eastern Kentucky and most of West Virginia, too.

3.Northern Maine may have the opposite situation where the very long, cold winters keep people inside.

4.The narrow strip in eastern Arizona is populated by native American tribes that live on reservations that are located in areas with extremely high summer temperatures.  In addition, it is well known that Native Americans have “thrifty” metabolism that leave them susceptible to obesity on a “western type diet.”

5.The State of Colorado is a region of higher relative activity and, therefore, is somewhat resistant to the increase in obesity found in other areas of the US.

Conclusion:  As reported by Dr. James Levine of the Mayo Clinic, inactivity is a major causative factor for the current obesity epidemic.