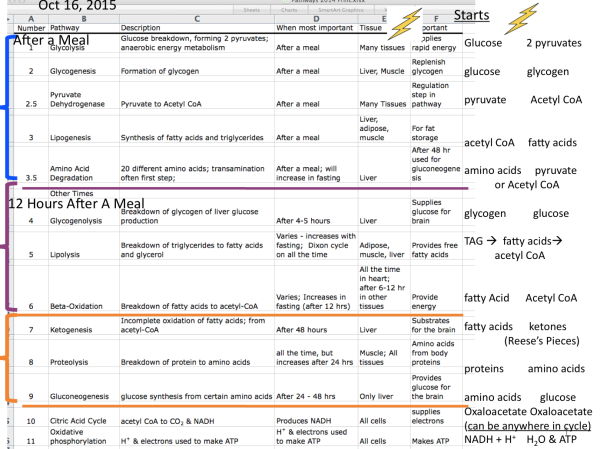 The Review Sheet (first paragraph, page 3) indicates that there are “lipid levels you need to know.” Which ones do we need to know?

Answer:  This is left over from a previous year when I required you to know a few lipid values.  I did not do that this semester. You do not need to know specific lipid values.

“I just have a question about the digestion process of Lipids. Where do the step “Bile acids breakup large fat droplets” and “Pancreatic lipase cleaves triglycerides” happen? Are they take place in the small intestine? Or liver?”

Thanks for the question.  These digestion steps take place in the lumen of the small intestine. The pancreatic lipase is secreted by the pancreas into the lumen of the small intestine.  The liver is later on. Nutrients are absorbed into the enterocyte, the cell that absorbs most nutrients in the intestine.  Then the nutrients have to leave the enterocyte and move into the blood. For lipids, the dietary fat is packaged into a chylomicron and this is secreted by the enterocyte into the lymph.  Chylomicrons are very large lipoprotein particles. They travel in the lymph until they are dumped into the blood at the thoracic duct.

After studying the lectures I came across a few questions I had:

2) from the study guide: which diet had the lowest adherence? ANS: Look this up in the powerpoint!

3) can oleic acid be turned to stearic acid? What are they? ANS: These are both fatty acids – 18 carbons long. Oleic has one double bond. Stearic has no double bonds. Stearic can be turned into oleic in the cell.

4) on the study guide- after one year how much weight was lost on average? In class you said that each diet produced the same weight loss results. ANS: On average about 2-3 kilograms per person.

5) where is VLDL converted to LDL and how does that happen? ANS: In the blood – after much of the triglyceride is removed from VLDL by lipoprotein lipase, what remains is cholesterol, and the particle becomes an LDL. There are many other things that happen. However, some cholesterol is picked up, too. Therefore, LDL is the major carrier of cholesterol in blood!

6)how does LDL enter cells? Does it flow freely in the blood? ANS: It enters via the LDL Receptor. This is discussed in the Powerpoint. There is also a chapter on this in the Ancel Keys book.

7) is the Dr. J and Dr. H referring to omega 6 fats? ANS: The Dr. Jekyll and Mr. Hyde refers to arachidonic acid, because this fatty acid does good things and it may also do bad things in the body. Arachidonic is an omega 6 fatty acid!

The good: It is needed in the brain for neurons.

It also calls immune cells when there is bodily damage.

The Bad: May call and activate too many immune cells, which then attack the body!